World number one Rafael Nadal, 24, is now unbeaten on clay in 34 matches and looks forward for a sixth French Open title in June.

Ferrer was leading in the second set a 4-2, but Nadal hit back with four straight games to take the match.

Nadal won the Barcelona Open five years in a row – beating Ferrer in the 2008 and 2009 finals – before skipping the tournament in 2010 because of a knee injury.

He became the first player in the Open era to win two tournaments six or more times, he has won The Monte Carlo Open seven times.

David Ferrer, his compatriot has now lost to Nadal three times in the Barcelona Open final. 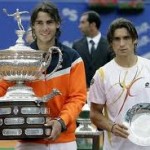