Etta James the legendary soul diva has died at Riverside Community Hospital, with her husband and sons at her side, manager Lupe De Leon said.

She had died in California from complications of leukemia.The singer, who also suffered from kidney diseases and dementia, was admitted to hospital last month as she was struggling to breathe. She had been in failing health for several years.

Among her best known songs are, ‘At Last’ and ‘I’d Rather Go Blind.’ She went on to win six Grammy Awards and was inducted into the Rock and Roll Hall of Fame in 1993.

She scored her first hit when she was just a teenager with the suggestive “Roll With Me, Henry,” which had to be changed to “The Wallflower” in order to get airplay.

Although she was popular on the R&B and blues scene throughout her career, mainstream success eluded her for many years.

Over the years, she’d notch many more, carving a niche for herself with her husky, soulful voice and her sassy attitude, which permeated her songs.

But it was the jazz-inflected rendition of “At Last” that would come to define her and make her legendary.

The song, which starts with sumptuous strings before James begins to sing, was a remake of a 1941 standard. James made it her own, and her version became the new standard. 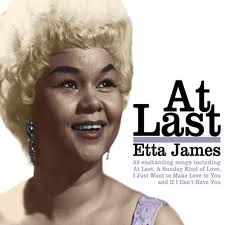