Tiger Woods remains to be a reckoning force to win at the Abu Dhabi HSBC Championship despite of the star studded line-up of Luke Donald, Rory McIlroy, Darren Clarke and Martin Kaymer who are all playing at the tournament.

On his website, Woods has given the gentlest hint he feels ready to follow up that first victory anywhere in more than two years.

‘It was great to finish 2011 strong. More importantly, it’s good to be healthy again.”

The 36-year-old’s off-course earnings in his prime were estimated at US$ 90 million (£60 million) a year, and while he has picked up a couple of new sponsors in recent months, luxury Swiss watchmakers are paying him less than US$ 150 million (£100,000 million) a year to be one of their ambassadors.

The days when Woods commanded appearance money in excess of US$ 4.5 million (£3 million) just for turning up at tournaments are gone.

However, the big question is whether Woods can still give his endorsers value for money. One person who is convinced that the American can still do it is Colin Montgomerie.

‘Tiger Woods will fight back to greatness.’‘I think he is going to start winning again. Not necessarily in Abu Dhabi but I fancy him for the Masters,’ says Montgomerie. 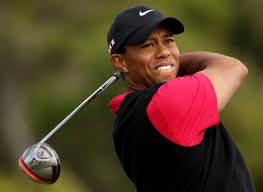