The proposed bill, the Freedom of Information (FOI) Act of 2012 is an urgent matter that Congress needs to pass.

The bill if becomes law, opens the door to reforms and initiatives that pursue greater transparency, accountability, and citizen participation in governance.

Greater access to information will, in general, empower citizens to hold their public officials accountable and to participate in government processes that are being opened to the citizenry as guaranteed by our constitution.

The 1987 Constitution enshrined state policies of full transparency and accountability in the conduct of all public officials and employees, and of full public disclosure of information vested with public interest.

The Constitution upheld the people’s right to know and be informed about all policies, projects, and programs of government that involve use of taxpayers’ money.

The proposed bill ensure that it serves public interest without compromising government’s legitimate rights on balance legitimate needs for secrecy with the public’s right to know.

With greater access to information on government projects and spending will allow civil society organizations to make more meaningful and accurate inputs to the Participatory Budget and Participatory Audit processes that the government has initiated.

The installation of P-Noy to the presidency was anchored on trekking the ‘daang matuwid’ (straight path); rid the nation of corruption, and alleviate poverty.

However, two years and two months that President Aquino has already been in office, the administration and its Liberal Party-led coalition in the House of Representatives have yet to do the job passing the FOI Act.

The more important part of the FOI Act, it guarantees public disclosure of documents on request or on demand of citizens asserting their right to access information in government custody.

The Filipino people need and must know what programs for the delivery of the most basic services, as well as how they can access with success and within reasonable time frames the most relevant public documents they need to secure and safeguard their most basic needs.

They also need and must know how public officials exercise their powers and authorities, how they spend public funds, what contracts and agreements they sign and seal on our behalf, what policy issues bother them that must also bother us so we may participate in making decisions.

The right to information is the protection of the citizenry against government abuses and let make them accountable for their deeds. 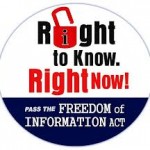