Birds as we all know are good navigators. Without a compass but merely relying on their sense of direction they are the migratory birds who can navigate in far away places due to the changing climates at their region of origin switching from winter to summer and vise versa.

Birds like humans, are good planners too, they usually leave during the winter where food are believed scarce and are back during the summer when the climate is good for hunting.

Their purpose of temporary migration is mainly for food and alternative shelter in another region of the globe.

While there is obviously a long way away that animals can be compared to humans in terms of mental capabilities, it shows that an animal with a brain structured quite differently from a human is still able to perform complex mental tasks of which only humans were once thought capable.

In a research conducted at the University of Otago in New Zealand, researchers found that birds, particularly pigeons have ‘impressive mental abilities’ and ‘remarkable talent’.

Like humans and other primates, pigeons were able to use abstract numerical reasoning.

Researchers found that pigeons could compare pairs of images involving up to nine objects and order them by the lower to higher number.

The researchers initially trained the pigeons by presenting them with 35 sets of three images, each with one, two, or three objects of different size, color and shape.

They were rewarded with wheat when they pecked the images in the correct ascending sequence.

Next, the researchers sought to test if the birds could take what they had learned from ordering the three images and apply it to images with higher numbers of objects than they had seen before.

They were presented with pairs of images with between one and nine objects and tested on their ability to respond to them in ascending order.

As well as performing above chance in these tests, the pigeons also demonstrated a ‘distance effect’ comparable to that found in landmark U.S. research in 1998 involving rhesus monkeys performing similar tasks.

The greater the distance between the numbers in the pairs, the faster and more accurate the pigeons were, Dr. Scarf said, in the international journal Science.

‘Our findings add to a growing body of evidence that pigeons are among a number of avian species exhibiting impressive mental abilities that really do give the lie to the old ‘bird brain’ insult.’

Dr. Scarf now plans to test the kea, a New Zealand parrot, which has been claimed to have the intelligence of a six-year-old child. 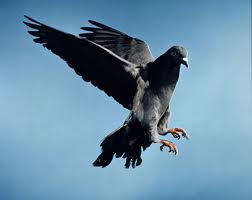