Bee Gees Star Robin Gibb who has been diagnosed with colon and liver cancer, said that he and his twin brother who died in 2003 have been paying for their global achievements.

Gibb believes that he could be suffering from cancer in return for the success of the pop band.

‘I sometimes wonder if all the tragedies my family has suffered, like Andy and Maurice dying so young and everything that’s happened to me recently, is a kind of karmic price we are paying for all the fame and fortune we’ve had,’ Gibb said. ‘But we’ve worked hard for everything we’ve achieved,’ he added.

Prior to being diagnosed with colon and liver cancer, he has suffered repeated health problems due to a twisted intestine.

Gibb delayed getting a scan on his colon for eight months after being told by doctors to do so.

He was trying to do an alternative treatment route by taking health foods and brewed special herb teas, that his wife gave him, but both of them knew that in the end he has still to undergo the inconvenience of conventional treatment after all.

Gibb sadly miss his twin brother Maurice who died of cancer in 2003 aged 53 and younger brother Andy who died in 1988 aged 30.

As a token of the Bee Gees’ contribution to the world the two surviving members, Robin and Barry Gibb receive their CBE’s (Commander of the British Empire) along with their nephew, Adam Gibb who received the honor on behalf of his father, the late Maurice. 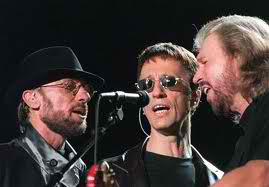