More than five hundred anti-government protesters calling for electoral reform were arrested after it has clashed with police.

The protesters are united against Prime Minister Najib Razak, a leader who has enjoyed high popularity ratings and good economic growth but who is a focus of anger for many Malaysians.

The demonstrators accuse him of presiding over a system that favors the ruling party, and they want reforms including the eradication of vote buying and preventing some people being allowed to vote several times during elections.

Police has fired tear gas at 8000 protesters, many of whom were left bleeding after the clashes. Crowds chanting “Long Live the People” and “Reform” were also sprayed with water cannons.

Mukhriz Mahathir, a leading member of the powerful United Malays National Organization (UMNO) which dominates the ruling coalition, said the government had to act to prevent anarchy.

Bersih has vowed to bring together tens of thousands of supporters in the center of the city to demand electoral reforms, in what threatens to become the biggest anti-government movement in Malaysia since Anwar Ibrahim’s sacking as deputy premier in 1998 led to violent street rallies.

The demonstrations were called as speculation mounted that Mr Najib may call an early election, perhaps as soon as this year.

Anwar Ibrahim, who now heads a three-party opposition coalition, turned up dressed in a yellow T-shirt, the color of the protest movement, to support demonstrators with his wife and daughter. “We want to send a very clear message that we don’t want a fraudulent electoral process,” he said. 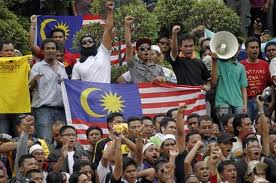