Maria Sharapova of Russia brushed aside Sara Ernani of Italy to win her first ever French Open title.

The new world no. 1 Sharapova become only the 10th woman to complete a career of the Australian Open, the French Open, Wimbledon and the US Open after beating Ernani in two straight sets 6-3 6-3.

Sharapova’s completion of the career grand slam comes almost ten years after she started out on the path – she won Wimbledon in 2004 as a 17-year-old, before adding the US Open two years later.

The Russian tennis player claimed a one-sided win to add to her Wimbledon, US Open and Australian Open titles from earlier in her career.

Sharapova overwhelmed her Italian opponent, who was playing in her first Grand Slam singles final.

Sharapova’s run in Paris has also moved her top of the women’s rankings.

Since she was last world number one in June 2008, the top ranking has been held by eight different players and changed hands on 15 occasions, while the last six Grand Slams have been won by six different women.

Sharapova, who has battled back from shoulder surgery that threatened her career and severely disrupted her serve, produced a display of power and precision which will now see her head into Wimbledon as a strong favorite. 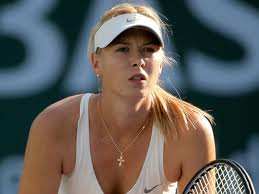