Scientists say we are being misled into thinking we have to drink far more water than is really necessary.

We need to consider the fact that much of our required daily fluid intake can be gained from the water contained in fruit, vegetables and other foods.

Spero Tsindos, of the department of dietetics and human nutrition at La Trobe University, in Melbourne, Australia, argued that the push to encourage people to drink more water was driven by vested interests.

‘Fruit, vegetables and juices should have a major role in providing the fluids we need’, he added.

He said the National Health Service (NHS) had reinforced the notion that two liters or eight glasses of water a day was good for health ‘without any substantial evidence to support it’.

If people drink two liters of water in a hurry to make up their daily allowance it will not hydrate the cells that need it, but simply dilute the urine, he pointed out.

Mr. Tsindos said sales of bottled water had risen in tandem with guidance from bodies such as the NHS telling individuals to drink large volumes.

Health and dietary authorities generally recommend two liters a day of fluid for optimal health, but ‘this has been misinterpreted to mean two liters of water specifically and it has driven a steady growth in the use of bottled water’, he added.

While water was now regarded as a slimming aid, tea and coffee were being wrongly tagged and shunned as potentially leading to dehydration.

Researchers emphasized that drinks containing caffeine contribute to our fluid needs and do not lead to dehydration.

Tsindos, a leading nutritionist and public health expert said, ‘We should be telling people that beverages like tea and coffee contribute to a person’s fluid needs and, despite their caffeine content, do not lead to dehydration.’

‘Drinking large amounts of water does not alone cause weight loss. A low-calorie diet is also required,’ Tsindos said.

Research has also revealed that water in food eaten has a greater benefit in weight reduction than avoiding foods altogether.

Independent dietitian Dr. Carrie Ruxton said individuals tend not to drink enough.
She added, ‘Drinking water is useful for weight loss, as part of a strategy of eating less and being more active. Research shows a glass of water before meals reduces appetite.

‘I agree that caffeine is wrongly thought to be dehydrating, people can drink up to eight cups of tea or four cups of coffee a day and be reassured that it’s healthy.’

She said, ‘At a time when many people are overweight and there is a tendency to drink too much alcohol, it cannot be disputed that water is the safest, simplest route to calorie-free, toxin-free, safe and healthy hydration.

‘Just listen to your body because our body knows exactly what we need, when we become hungry that’s the time we need to eat and when we are thirsty then that’s the time we drink water, so there’s no need to overdo things more than what is necessary,’ says a leading health expert. 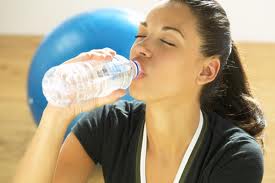