Marine Pests have plagued port cities and annoyed boat shipowners for centuries. The gribbles are the marine version of termites.

The gribbles, which are the tiny crustaceans, chew the wood pilings from the outside, while ship worms, larger mollusks bore tunnel within.

It is well known that gribbles cause millions of dollars a year in damage to wooden piers, seawalls, and boats.

Paul Boyle, director of the Wildlife Conservation Society’s New York Aquarium, said that wood is an incidental part of the crustaceans’ diet.

Today, most piers and boats are constructed with materials that are resistant to the borers, such as concrete in the case of piers. “The technology has moved in a direction to have wood be a sacrificial facing on more substantive structures,” Boyle said.

Over the next few years, New York City plans to spend hundreds of million dollars on shoreline parks. But most of the money will be spent to rehabilitation work of piers.
Wood pilings for piers that were being eaten by marine life are being replaced by steel encased concrete supports.

For greater access by the public to the long elusive waterfront, parks officials first have to shore up a hidden support network across the city’s more than 800 kilometers of coastline.

According to city estimates, hundreds of millions of dollars have already been spent in recent years for pier construction, and work to be done in the next 5 years is expected to cost an additional US$ 300 million dollars.

At Brooklyn Bridge Park, officials are spending US$ 11 million dollars to encase more than a thousand pilings beneath pier 5 in concrete. The cost to do all 12,000 pilings at the park in the next few decades is US$ 200 million dollars.

This summer, workers are stabilizing pier 5, which is supported by about 3,000 timber pilings, half of which needed immediate repair.

Starting last year, technicians and divers began fitting a steel cage and fiberglass mold around each piling, then pumping in with concrete. A single piling encasement can cost from US$ 7,000 dollars to US$ 30,000 dollars.

According to Jennifer Klein, director of capital operations at Brooklyn Bridge Park, the cost expended to the hidden infrastructure is one of the most challenging things to explain. “That a great majority of what we’re spending money on is for things that aren’t visible,” said Klein. 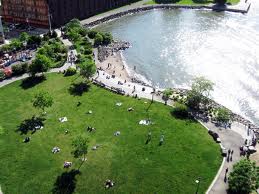 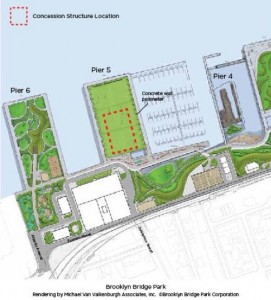