During the autumn, many of western Canada’s rivers are ‘alive with salmon’ as the fish return to spawn through annual migration.

However, many of the salmon are caught by bears and wolves, which carry carcasses away from the streams. This allows nutrient rich plants to thrive in these areas.

Pacific salmon plays an important role in providing nutrients to part of the world’s largest old-growth temperate rainforest, a study has shown.

The researchers said that a shift in salmon numbers would have “far-reaching impacts” on biodiversity.

“Along the Pacific coast, all salmon die after spawning so carcasses can line rivers, but many of them are killed before by bears and wolves,” explained co-author John Reynolds, professor of ecology at Simon Fraser University (SFU), Canada.

They found a distinct pattern in where the nutrients were found, and how it affected the plant diversity.

“Most of the carcasses that are left behind by the bears and wolves, who only normally only eat a small part of the salmon, are dropped within the first five to 15 meters of the stream,” says

The team found that nearer the stream, the plant community was dominated by species that thrived on large amounts of nitrogen.

However, this was at the expense of diversity, which suggested that nutrient-rich plants such as salmonberry and elderberry were able to out-compete other species.

“As you move away from the stream, you tend to switch to a community of species which are less dependent on this extra nitrogen,” Professor Reynolds observed.

The researchers found that in areas that had streams containing fewer salmon, the bordering plant life consisted of species with lower nutrient contents, such as blueberry and huckleberry.

In their paper, the two researchers said that predicting how salmon affected terrestrial ecosystems would play a key role in shaping effective conservation and habitat management techniques. 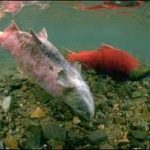 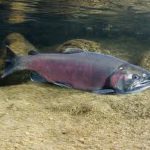 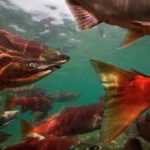