McDonald food chain has dismissed calls to review the impact of its food on childhood obesity.

Its corporate symbol, Ronald McDonald would still be peddling their Happy Meals to kids towards the future.

“This is about choice and we believe in the democratic process,” Chief Executive Jim Skinner told a packed room at its shareholders’ meeting, to an enthusiastic wave of applause.

“This is about the personal and individual right to choose.”
Shareholders of McDonald Corp. resoundingly rejected a proposal that would have required it to issue a report outlining its role in the childhood obesity epidemic, saying customers were free to make their own dietary choices.

Among the dissenters at the meeting was Dr. Donald Zeigler, director of Prevention and Health Lifestyles at the American Medical Association, who asked when the burger chain will stop marketing to children using Ronald McDonald.

Zeigler, who is also visiting assistant professor at Rush University Medical Center, was one of 550 healthcare professionals who had signed an open letter to McDonald’s pleading that it “stop making the next generation sick.”

Ironically, Miles White, chairman and chief executive of diversified healthcare company Abbott Laboratories, has been a director of the McDonald’s board since 2009.

Abbott makes a broad range of drugs, including cholesterol-lowering statins, and medical devices, such as heart stents used on patients with clogged arteries. 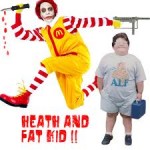