Meryl Streep has been named best actress by the New York Film Critics for her portrayal of Margaret Thatcher in upcoming film ‘The Iron Lady’.

The Iron Lady, Margaret Thatcher look back at her 11-year career as Prime Minister and two time Oscar winner Streep said taking on the role was a ‘privilege’. Her winning the prestigious award from critics suggests that she is a frontrunner for an Oscar.

The veteran US actress’ last Academy Award, for Sophie’s Choice, was 30 years ago. Her first award was in 1980 for Kramer vs. Kramer.

Other winners at the New York Critics Circle Awards included Brad Pitt , who was named best actor for baseball film Moneyball, and Terrence Malick’s The Tree Of Life.

Rising star Jessica Chastain got best supporting actress for her role as Pitt’s wife in the film as well as her performances in The Help and Take Shelter. 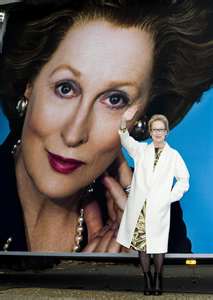