The actress’s illness is said to have been triggered by the stress of Michael’s six-month fight against throat cancer.

Now her husband has vowed to take her and their children on a round-the-world trip, to give her something to look forward to.

Catherine has been battling these problems for some time but held herself together for Michael. But after he was told his tumor had gone, it was time to deal with her issues.

Fresh from his cancer battle, Michael Douglas has now reportedly devoted himself to caring for his wife Catherine Zeta-Jones following her battle with bipolar disorder.

‘Just months after needing to be looked after around the clock, Michael became the carer.

‘He has been treating Catherine to romantic dinners, spa treatments, and lots of emotional support.’ 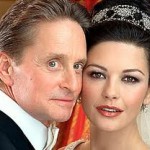