Microcurrent therapy or MCT refers to home use gadgets that manufacturers claim can relieve countless conditions.

With such names as Alpha-Stim and Microdoctor, these devices are typically powered by little more than a few AA batteries, and deliver a tiny current to the skin via clips or sticky pads. The electrical charge is so weak that it cannot usually be felt.

These gadgets are being touted as treatments for everything from joint and back pain to headaches, gout, multiple sclerosis and even depression.

With this kind of therapy, some experts are quite open to the concept. Our bodies are composed of billions of atoms, which produce electrical signals that run almost instantaneously through the body as nerve signals, controlling all bodily functions, both conscious and unconscious.

Often above 60 milliamperes, to stimulate the nerves and block pain. ‘New applications are mostly used for pain relief and soft tissue injury,’ says Tim Watson, professor of physiotherapy at the University of Hertfordshire.

His team reviewed the clinical evidence for its efficacy in medical use two years ago and concluded that it is unquestionably effective. ‘There is no doubt that MCT works,’ says Prof Watson. ‘But we don’t yet know whether it’s the current strength, the pulse pattern or the treatment duration that makes a difference.’

Physiotherapist Andy Buckley says: ‘I’ve been using a microcurrent device called a Tendonworks for the past 18 months for my older patients who have suffered injuries while jogging. Normal therapy might include mobilization and exercises, and MCT works well when used in combination with these.’

One patient who has reported using MCT with remarkable results is Joanne Thompson, 32, a photographer who lives in Cambridgeshire with her husband and children.

She developed depression four years ago after her youngest daughter was born with a rare bowel condition. Joanne says: ‘By the time I went to my doctor the following December, I was having suicidal thoughts.‘I was put on antidepressants and referred to a therapist.

‘For the next two years I was anxious and frequently in tears. I suffered panic attacks and had severe side effects from the medication, tummy upsets, nausea and weight gain.

‘A friend of mine had been using an MCT machine called Alpha-Stim to help with stress and she suggested I try it alongside the pills. I was skeptical, but did some research and was impressed by the clinical studies and testimonials.

‘You attach the clips to your ears and turn it on. I used it daily for two to three hours and would fall asleep with it on.

‘Within two months I felt a definite lift in my mood. After three months I felt I was able to cope with everyday life. It was a very gradual process.’

Dr. Lesley Parkinson, a consultant clinical psychologist, believes Alpha-Stim may have had an effect: ‘The pills didn’t appear to have been working and they had been given plenty of opportunity to do so.

‘Also, Joanne wasn’t expecting MCT to work, which would indicate that the machine did help. Anything like this that doesn’t have side effects is worth a try.’ 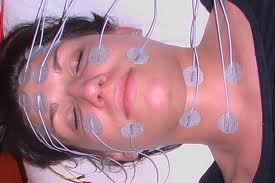