Former world No 1, Tiger Woods made a 69 to finish 10 under par for the tournament, one ahead of Zach Johnson who carded a 71, to win the Chevron World Challenge title.

Woods was trailing his fellow American Johnson but birdied the last two holes, pulling out a two at the short 17th and then adding a three at the last to close out victory to end his long victory drought.

It was his 83rd win worldwide in tournaments that award ranking points, but his first since he won the Australian Masters on Nov. 15, 2009.

Woods had conceded the overnight lead to Johnson after a third round of 73, but he only trailed by one shot and it remained tight between the pair throughout the closing 18 holes.

But when it mattered most Woods made back-to-back birdies while his playing partner managed just pars, securing the swing he needed to take the title and the US$ 1.2 million (£770,000) in prize money.

It gave him his first PGA Tour win since the BMW Championship in September 2009 and his first of any kind since the Australian Masters in November of the same year.

Woods won the Chevron World Challenge, which he hosts for his foundation, for the fifth time. He finished at 10-under 278 and donated the US$ 1.2 million to his foundation.

The win moved him from No. 52 to No. 21 in the world ranking, and likely will send expectations soaring for 2012. Woods will not play again until starting his year in Abu Dhabi at the end of January.

England’s Paul Casey, who began the week with a 79, finished third on five under after a third successive round under 70, a 69 on Sunday.

Hunter Mahan and Matt Kuchar both went round in 71 to share fourth place on four under, three clear of Jim Furyk, Martin Laird, Rickie Fowler and Bubba Watson who tied for sixth.

Scotland’s Laird had been seven over par through his opening two rounds but finished with a 70, after Saturday’s 66.

First-round leader KJ Choi went into reverse after his opening 66, and had his worst round of the week on Sunday, a 78 which left him 12th.

Johnson reaction to Woods winning the title, “If the man is healthy, that’s paramount,” Johnson said. “I mean, he’s the most experienced and the best player I’ve ever played with. In every situation, he knows how to execute and win.” 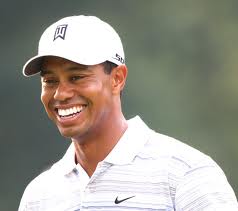