A research team from Netherlands led by Ron Fouchier at Rotterdam’s Erasmus Medical Center said it had created a mutant version of the H5N1 bird flu virus that could for the first time be spread among mammals.

The announcement led to fears the mutant virus could find its way into nature or in the wrong hands and its method of mutation could be used by terrorists.

The H5N1 strain of bird flu is fatal in 60 per cent of human cases but only 350 people have so far died from the disease largely because it cannot, yet, be transmitted between humans.

However, Mr. Fouchier said in a statement, his team had discovered that transmission of the virus was possible between humans “and can be carried out more easily than we thought.”

“In a laboratory, it was possible to change the H5N1 into a virus, that can easily be spread through the air. This process (mutation) could also happen naturally,” Mr Fouchier said.

“We need to be very vigilant,” said French Health Minister Xavier Bertrand of the discovery.

EU Health Commissioner John Dalli told journalists he had received assurances from Dutch authorities that the virus was secure.

“The Dutch authorities confirmed that the virus itself is stored in a very secured way and that the necessary permits were given and that the researchers are bound by a code of conduct,” Mr Dalli said.

“One of the issues, is to ensure that any information coming from this research is well controlled and without sensitive details about mutation being given,” he said. 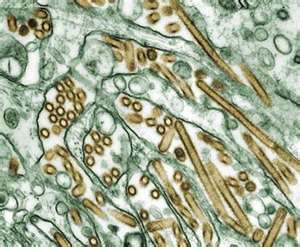