Myopia, or short-sightedness, now affects between 80 percent and 90 percent of school children in the major cities of countries such as China, Japan and South Korea, says study.

Recent evidence suggests short-sightedness is to a great extent due to environmental rather than genetic factors.

Numerous studies have shown a link between close reading and intensive study and myopia.
Based on eye experts’ criteria, you are considered myopic if your vision is blurred beyond 2 meters (6.6 ft.), and it is often caused by an elongation of the eyeball that happens when people are young.

According to the research, the problem is being caused by a combination of factors, a commitment to education and lack of outdoor light.

The Sydney Myopia Study of Australia, indicated that children who read continuously or at a close distance were more likely to be short-sighted.

More recent work had shown that increased amounts of time spent outdoors may protect against myopia. “The protective effect seems to be associated with total time outdoors, rather than with specific engagement in sport,” according to experts.

Professor Ian Morgan from the Australian National University in Canberra, argues that many children in South East Asia spend long hours studying at school and doing their homework.

This in itself puts pressure on the eyes, but exposure to between two and three hours of daylight acts as a counterbalance and helps maintain healthy eyes.

Greater exposure to sunlight may protect eyesight by stimulating the release of retinal dopamine, a ‘neurotransmitter’ involved in nerve signalling.

Scientists believe that the chemical could be playing a significant part in preventing elongation of the eyeball that causes myopia.

Cultural factors also seem to play a part. Across many parts of South East Asia, children often have a nap at lunchtime, which is prime myopia prevention time.

More than other groups, children in East Asia ‘basically go to school, they don’t go outside at school, they go home and they stay inside. They study and they watch television,’ the scientist said.

The researchers, collating the findings of studies from around the world, stressed that being a bookworm or computer geek does not in itself put you at risk.

He said ways must be found to get children to spend more time in reasonably bright daylight without compromising their schooling. 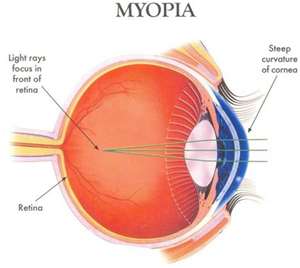