American Webb Simpson carded a 3-under 69 in the third round that gave him a one-shot lead over Ryan Moore and Darren Andrew Points going into the final round of the Wells Fargo Championship.

Northern Irishman McIlroy who had the day’s most eye-catching round, as his six-under 66 took him to 12 under par, two shots off the lead.

Simpson carded five birdies against two bogies, while overnight leader Nick Watney,
Simpson’s house guest for the week and playing partner for the day, was level for the day to sit in a share of fourth alongside McIlroy.

The 2010 champion, McIlroy, birdied four of the first five holes and was six under through 11, but from there could only manage one more birdie and a second bogey at the 15th and 16th.

“When you get off to a good start like that, you birdie the first three holes, it gives you momentum early, and it’s something you can just go with,” McIlroy said.

Overnight leader Nick Watney slipped back into a share of fourth with McIlroy after driving into the creek that meanders along the left of the fairway at the final hole and finishing with a five for a round of 72.

A shot behind Watney and McIlroy were Rickie Fowler, who carded a five-under 67, and Stewart Cink.

Phil Mickelson and Lee Westwood both had better days, going four under to sit in a share of 30th on five under, in a group which also contained Scotland’s Martin Laird. 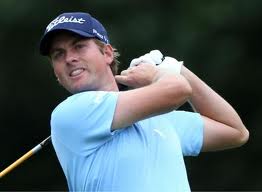