Scientists are harnessing a new approach in treating baldness after taking inspiration and studying the way animals both grow and shed their winter coats.

It could benefit at least 50 percent of all men who are completely bald by the time they reach 50, as well as tens of thousands of women experiencing thinning of hair after menopause.

Hair growth in animals is triggered both by hormones in the skin layer known as the dermis as well as signals from elsewhere in the body.

These signals vary with the seasons, which is why animals can grow thicker fur in the colder months.

Scientists have been searching for a baldness cure for years, without success but altering the environment around a person’s hair follicles could be key.

Dr. Cheng-Ming Chuong, from the University of Southern California, said scientists could harness this ability to create a new approach to treating human baldness.

Instead of trying to stimulate the hair follicle directly by implanting stem cells into it, Dr Chuong said a treatment could try to alter the environment around the hair follicles. This could create the outside signals present in animals but long since lost in humans.

‘To deal with the hair growth, you not only try to help the stem cell, but you can improve the ‘soil,’ like You put a tulip bulb in a nicer soil, you will grow a nicer hair.’

At present, the only two to have been clinically proven to slow down hair loss and prevent a bald patch worsening are the drug finasteride and a lotion called Minoxidil.

Hair can be replaced with painful and expensive surgical hair transplants, where follicles are removed from an area of dense hair on the head and transplanted to the bald patch. 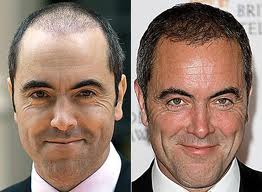