A new generation of physicists first made the experiment in September but they have to carry it out again, only to confirm with the same result on their previous first experiment.

With the results, scientists are now certain that they can disprove Einstein’s assertion that nothing can travel faster than light.

Albert Einstein in 1905, stated in his theory of special relativity that nothing can travel faster than a light beam in a vacuum. According to the theory, it would take an infinite amount of energy to exceed the speed of light.

In their experiments, scientists used subatomic particles called neutrinos, the test suggests that it can break the ultimate light speed barrier.

In their experiment, they beamed neutrinos through 730 kilometres (454 miles) of rock from the nuclear research facility CERN, in Switzerland to Gran Sasso, Italy.

A light beam would take 2.4 milliseconds to travel the distance, but both experiments have shown a neutrino can beat it there by 60 billionths of a second.

The Oscillation Project with Emulsion-Racking Apparatus detector (OPERA) at the Gran Sasso National Laboratory in Italy, which received the nippy neutrinos has defied modern physics when the neutrinos arrived at the detector in Italy 60 nanoseconds earlier than light particles.

Scientists have submitted their latest findings to the Journal of High Energy Physics for consideration.

Many physicists still in doubt about the findings, claiming that errors in the experiment must have distorted the result.

Stefan Soldner-Rembold, a professor of particle physics at Manchester University, expressed cautious excitement at the announcement. ‘If it turns out to be true, it will revolutionize modern physics.’

The structure of the CERN beam has been ruled out in the OPERA experiment, which had been suspected to be a possible source of error by many experts.

Most physicists will only start believing it once other experiments in the U.S. and Japan confirm the result and once more mundane explanations related to the experiment are completely ruled out. This will take several years. 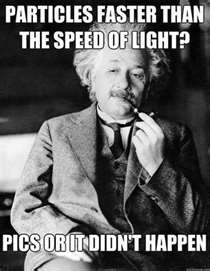