Former world no. 1, Tiger Woods wins a point to clinch the Presidents Cup for the United States beating the International team 19-15 in Melbourne.

Woods beats Aaron Baddeley of Australia and earns a point for the American team to retain the cup.

The International team, who last won the Presidents Cup in 1998, also at Royal Melbourne, made a fast start on a sunny day in Victoria.

The 14 major title holder was a controversial wildcard pick after injuries and a serious slump in form, marred his games.

“I played well all week, but unfortunately didn’t make any putts in the first four matches,” said Woods.

He credited team-mate Steve Stricker for a putting tip that helps him find his touch on the greens having not been able to buy a putt throughout the tournament.

US captain Fred Couples, celebrating his second win in charge, said: “For Tiger to get the winning point makes us feel very good as a team.

“I got frustrated a bit (by the attacks on his selection) because I felt I was picking the greatest player I’ve ever seen play.

“I heard he was the Tiger of old today and Aaron Baddeley said it was phenomenal.”

The 35-year-old finished with a 2-3 record for the tournament having saved his best for last.

Woods’s victory was a repeat of 2009, when he hit the winning putt against South Korea’s YE Yang at San Francisco to hand the United States their sixth Cup.

Meanwhile, the captain of the International team Greg Norman has this to say about his team:

“The guys stepped up to the plate, very very proud of them for doing that,” said Norman. “My team can hold their heads up extremely high. We’ll take a lot out of this tournament.” 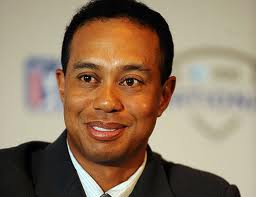