Tiger Woods finally won a point but the International team fought back to 13-9 down to keep alive their hopes of winning the Presidents Cup.

The Americans built a big lead Saturday morning in the foursomes matches, with Woods finally rewarded with a point, then turned back a rally from the International team in the worst of the weather in the afternoon by capturing the final two matches.

Woods and Dustin Johnson prevailed over Adam Scott and KJ Choi, while Phil Mickelson and Furyk went birdie-eagle-birdie from 11 to 13 to go from one down to one up against Aaron Baddeley and Jason Day. The veteran Americans cruised to the line, 2 and 1.

In the afternoon, the Internationals were boosted by a surprise point win from KT Kim and YE Yang against Woods and Johnson in the four-ball.

Jim Furyk finished off the wild day with a clutch bunker shot on the 16th hole, and Nick Watney secured a par on the final hole for a 1-up decision over Adam Scott and Ernie Els that changed everything.

Those last two wins gave the Americans a 13-9 lead going into the 12 singles matches Sunday, a deficit from which no team has recovered in the 17-year history of this tournament.

The former world number one, who was the only American not to register a point in the opening two days, struggled with his putting in the fourballs, missing nine putts from within 15 feet.

The tournament will be decided in the 12 singles matches on Sunday, where Woods will face Aaron Baddeley in the penultimate match. 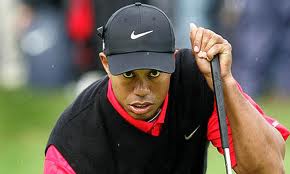