Carl Lewis candidacy for a senate seat of New Jersey was rejected by a top election official because the nine-time Olympic gold medalist Carl Lewis fails to meet the four-year residency requirement to run for elected office.

Mr Lewis had said he wanted to give something back to the southern New Jersey district where he grew up by running for the state Senate as a Democrat.

Secretary of State Kim Guadagno rejected the 49-year-old’s bid to run for state Senate as a Democrat and ordered that Mr Lewis’s name be taken off the primary ballot.

Ms Guadagno, a Republican who also serves as the state’s lieutenant governor, overturned an earlier decision by an administrative law judge that said Mr Lewis should be allowed to run because Republicans had not proved Mr Lewis failed to meet the requirements.

The former Olympic champion will now have the opportunity to appeal Ms Guadagno’s decision. 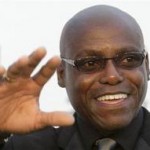