US authorities in recent years have pressured several global banks to help them fight tax evasion.

The US Department of Justice’s initial target was Switzerland’s biggest bank, UBS.
It has threatened UBS with legal action if the Swiss bank failed to hand over the details of 4,450 American customers suspected of tax evasion.

Swiss bank secrecy, which helped the country become the world’s biggest offshore banking center with US$ 2 trillion dollars in assets, has come under fire in recent years from cash-strapped governments clamping down on tax evasion.

The Swiss government has ordered Credit Suisse to turn over account data on some wealthy American clients as part of a U.S. effort to crack down on tax evasion.

Swiss bank Credit Suisse has sent letters to some US clients, saying their account details may be given to the Internal Revenue Service (IRS).

Clients are told they can either agree to the handover of data to Swiss tax authorities who can send it to their US counterparts, or contest the process.

The U.S. IRS had recently asked the Swiss Federal Tax Administration (SFTA) for help in locating information on American account holders under a 1996 American-Swiss tax treaty.

The United States and several European countries, notably Germany, Britain and France, have been seeking in recent years to ensure that their citizens cannot take advantage of Swiss banking secrecy to hide assets.

The Offshore Compliance Initiative, a U.S. Justice Department effort to track down tax cheats, is conducting criminal investigations into at least eight banks.

In October, Bank Julius Baer, a private Swiss bank, said two of its advisers had been charged with conspiring to help clients evade U.S. taxes on more than US$ 600 million dollars hidden in offshore accounts.

Credit Suisse said last week that it was setting aside 478 million Swiss francs, or $535 million, for legal costs related to tax evasion charges in the United States and Germany.

In September, it reached a deal with the German authorities to end an investigation over allegations that employees in Düsseldorf had helped German clients to hide income from tax collectors.

Following years of intense pressure from the United States, in June last year the Swiss parliament passed legislation permitting the country’s banks to share customer details with the US authorities. 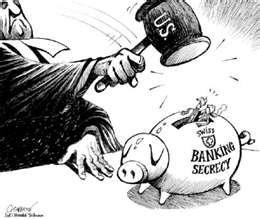