Many years back, an aspiring sushi chef prefer to join a traditional sushi restaurant as an apprentice striving later to become a taisho or a restaurant entrepreneur.

With uncertain job security along with long term employment concept sticking to one employer, chefs are tapping opportunities overseas.

As many sushi restaurants opening in Europe and Latin America, Japanese sushi schools are training multitude of students for the demanding market of sushi chef overseas.

More than 700 students have graduated from the Tokyo Sushi Academy since it started in 2002. It has enrolled about a hundred students each year in either intensive for a two month programs or yearlong diploma courses.

There is a growing urge abroad for sushi that students at the privately owned academy plan to join the growing ranks of professional Japanese chefs eager to serve.

Their plan is to seek jobs overseas as revenue is slipping within the Japanese sushi sector amid a, based in Tokyo. cutthroat competition within the restaurant industry.

The US$ 17.4 billion dollars sushi restaurant industry in Japan is changing, according to Akihiro Nisugi, a restaurant consultant at Funai consulting.

It was also noted by him that fast foods in Japan is growing while the traditional sushi restaurant industry is contracting.

Tahra Matsuki, 39, who completed a sushi course at the Tokyo Sushi Academy, two years ago, set up a catering business in Warsaw last year after working at a sushi restaurant in Poland.

Mr. Matsuki, who now employs 5 Polish workers. His principal product is a US$ 7 dollar sushi lunchbox aimed at business executives.

The speed with which he was able to open his own business contrasts with the centuries old traditions of the Japanese sushi apprenticeship.

According to Ken Kawasumi, chief instructor at the Sushi Academy and a former sushi chef, people say that it takes three years before one can master the nigiri and five years before you perfected the making of sushi, the roll and you need ten years before you become a full fledge master but now it’s not the valid approach any longer.

Even with the training, the skills needed overseas can vary from those required in Japan. Some Japanese favorites, like conger eel, are not available in most overseas markets, while many consumers in Europe turn up their noses at raw shellfish or salmon roe, which are standard fare in Japan. 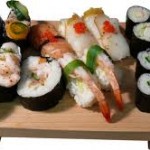