World no. 1 Novak Djokovic of Serbia defeated his fellow countryman Victor Troicki 6-3 6-4, advances to round four of the Sony Ericsson Open in Miami.

Djokovic needed one hour and 25 minutes to see off his compatriot, seizing his solitary break point opportunity in the first set and breaking Troicki twice in the second despite also dropping his own serve.

The Serb will play Richard Gasquet for a place in the quarter-finals after the Frenchman’s win over Albert Ramos.

Andy Murray, given a free passage through to the fourth round of the Sony Ericsson Open by Canadian Milos Raonic, will face French Gilles Simon.

Richard Gasquet had to rally to see off Spain’s Albert Ramos 6-2, 5-7, 6-3 in a match lasting more than two and a half hours, while in an all-Spanish clash 12th seed Nicolas Almagro beat Fernando Verdasco 6-3, 6-4.

In the women’s event former world number one Serena Williams continued to step up her comeback with an impressive 7-5, 6-3 win over sixth seed Sam Stosur. Williams needed one hour and 46 minutes to wrap up victory, breaking the Australian five times.

Williams, who has won the Miami tournament five times, reached the quarter-finals for the 11th time in 12 appearances.

The 30-year-old will meet the winner of the match between fourth seed Caroline Wozniacki and number 23 seed Yanina Wickmayer, in the last eight. 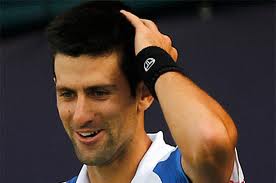