Top-ranked Novak Djokovic kept up his strong play this season with a 7-5, 6-3 victory over Marin Cilic of Croatia.

The 24-year-old Serb is the last of the top four seeds to reach the quarterfinals of the Masters Series event.

Djokovic, winner in 2007, continued to settle into his new role as world number one with a business-like 7-5 6-2 third round victory over Croatian Marin Cilic that extended his season record to a spectacular 50-1.

Federer, who turned 30 on Monday, was playing for the first time since losing to Tsonga in the quarterfinals at Wimbledon.

The Frenchman again proved stronger in the closing stages than the world number three, winning an entertaining contest packed with dazzling rallies that delighted a packed center court crowd. Federer found himself unable to match the Frenchman.

World number two Spaniard Rafael Nadal, a double winner in Canada and number four Briton Andy Murray, the two-time defending champion, both lost their opening matches to leave Novak Djokovic as the only former champion left in the draw. 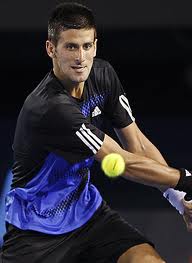