World number one Novak Djokovic, looking forward to become the first man in forty three years to hold all the Grand Slam titles, made a flying start by defeating Slovenian Blaz Kavcic 6-0, 6-4, 6-4 in the second round at the French Open.

The crowd sitting in the sunshine on the Suzanne Lenglen showcourt, vouch for the underdog Kavcic, when he won his first game, for 1-1 in the second set, they cheered him wildly.

The Slovenian, ranked 99th, was putting everything into his efforts, trading well with Djokovic from the back of the court, breaking Serbian Djokovic for 2-1 before surrendering his own serve on the fourth break point in a long, hard eighth game.

The second set took more than twice that. The crowd cheered when Kavcic finally got on the board in the eighth game, and it turned out to be more than just a blip for Djokovic as he promptly lost the next two games as well.

Kavcic saved three match-points before putting a backhand long on the fourth to give Djokovic the victory.

Djokovic will either face Frenchman Nicolas Devilder or German Michael Berrer in the third round. 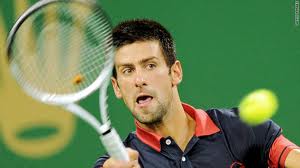