Kvitova is the first Czech since Jana Novotna in 1998 to win Wimbledon, and Novotna and former Czech great Martina Navratilova were in the Royal Box to watch her game with the Russian.

The Czech was by far the less experienced of the finalists and three-time Grand Slam winner Sharapova looked ready to take advantage of that with an early break, but Kvitova leveled immediately with some piercing returns.

Sharapova did make her younger opponent serve for the title but Kvitova played with consistency, moving to 40-0 and choosing championship point to send down her first ace of the day before sinking to victory. 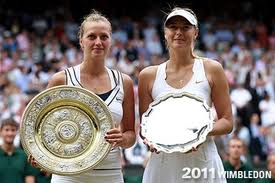