World number one Novak Djokovic earlier needed just 44 minutes secure his place in round two when Ireland’s Conor Niland had to retire from their match because of illness.

The unlucky Niland came through qualifying and was playing the biggest match of his life, but walked onto court apparently suffering with food poisoning, and when Djokovic went 6-0 5-1 up, the ailing Irishman admitted defeat.

The Serb had contrasting emotions, saying: “I felt great on the court, and that’s something that’s really important for the start of the tournament. Today was a great opening performance.”

And asked about the shoulder injury that forced him to retire from the recent Cincinnati final, he added: “Today I didn’t feel any pain. I served well and I played well, so I have no concern.”

Rafael Nadal opened the defense of his US Open title with a straight-sets win over Andrey Golubev that was anything but straightforward for the Spaniard.

Nadal recovered from deficits in all three sets and saved seven set points in a thrilling second before coming through 6-3 7-6 (7-1) 7-5 in New York.

Golubev, the world number 98 from Kazakhstan had a great chance serving at 5-3, 40-0 in the second set but failed to capitalise, and let a double-break lead slip away from 5-2 in the third as the far steadier Nadal prevailed.

“For sure I was nervous,” said the Spaniard. “That’s normal. It’s normal to start the tournament like this with some nerves. I was a little bit lucky to win today in straight sets. He was a very difficult player to play.”

“But it’s a positive start winning in straight sets,” Nadal said after the two hour, 49 minute struggle. “I’m happy I’m through (to the second round).” 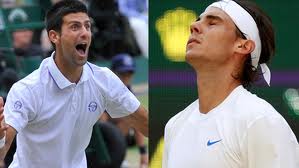