The essence from Jasmine (Gardenia Jasminoides) has been proven to contain the same molecular mechanism of action and is as strong as the commonly prescribed barbiturates or propofol. They soothe, relieve anxiety and promote sleep, a team of German researchers has found out in their study.

They suggested that instead of sleeping pill or a valium, a nosefull of soothing Jasmine is just as effective in calming your nerves and helping you to get restful sleep.

The researchers have now been granted a patent for their discovery. The report was made available in the current issue of the Journal of Biological Chemistry.

They have discovered that the two fragrances vertacetal – coeur (VC) and the chemical variation (PI245B) have the same molecular mechanism. 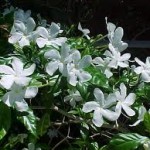