Experts believe there are about 50,000 to 60,000 of the two species of orangutans left in the wild, 80 percent of them in Indonesia and the rest in Malaysia.

They are faced with extinction from poaching and the rapid destruction of their forest habitat, driven largely by palm oil and paper plantations.

The government must immediately halt the clearance of this protected area of forest in the 13,000-hectare (32,000 acres) peat swamps in Tripa, Aceh province, the groups, including Greenpeace and Friends of the Earth said.

The critically endangered orangutans in this protected area of Indonesia will be wiped out by the end of the year if land clearing is not stopped, a coalition of environmental groups have warned.

They also called on the government to investigate the use of fire by palm oil companies for land clearing and reinforce existing laws protecting the ecosystem.

Ian Singleton, conservation director of Swiss-based PanEco, one of the groups making up the Coalition for Protection of Tripa Swamp, said the roughly 200 orangutans left in the peat swamps will be gone in months if the fires continue.

Most of those left are the endangered Bornean orangutan species. And Singleton said that based on 2004 figures there are only 6,600 of the critically-endangered Sumatran orangutans left in North Sumatra and Aceh provinces.

“We suspect that up to 100 orangutans may have perished in forest clearing and peat burning in the last few months in Tripa,” said Graham Usher of local group Foundation of a Sustainable Ecosystem.

At least 2,800 hectares of peat were destroyed in the latest fires, and the number of animals, including Sumatran orangutans, Malayan sun bears and Sumatran tigers that perished was ‘immeasurable’, the local group added.

“The speed of destruction, fires, burning and everything has gone up dramatically in the last few weeks, let alone in the last year, and this is obviously a deliberate drive by these companies to clear all the remaining forests,” according to Singleton.

“If this is not stopped right now, then all those orangutans, all those forests, will be gone before the end of 2012.” 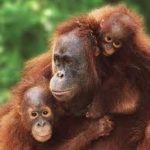