The ancient Incas called quinoa as the ‘mother grain’ and it has been the staple food of millions of native inhabitants in the South American Andes since ancient times.

In Peru, Chile and Bolivia, quinoa is now widely cultivated for its nutritious seeds. The seeds are used in creating various soups and bread, and also fermented with millet to make a beer-like beverage.

A sweetened decoction of the fruit is used medicinally, as an application for sores and bruises.

The leaves of the goosefoot (quinoa) plant are also edible and make a pleasant vegetable, like spinach. A quinoa leaf salad is generally more nutritious than most green salads.

In South America the saponin which is removed from the quinoa is used as detergent for washing clothes and as an antiseptic to promote healing of skin injuries.

The quinoa seed is high in protein, calcium and iron, a relatively good source of vitamin E and several of the B vitamins. It contains an almost perfect balance of all eight essential amino acids needed for tissue development in humans.

It is exceptionally high in lysine, cystine and methionine-amino acids typically low in other grains. It is a good complement for legumes, which are often low in methionine and cystine. The protein in quinoa is considered to be a complete protein due to the presence of all 8 essential amino acids.

Some types of wheat come close to matching quinoa’s protein content, but grains such as barley, corn, and rice generally have less than half the protein of quinoa.

The fat of quinoa is relatively high when compared to other grains, but it boasts a low sodium content and also provides valuable starch and fiber.

Quinoa also contains albumen, a protein that is found in egg whites, blood serum, and many plant and animal tissues. The seeds are gluten-free which makes this a nutritious and flavorful alternative grain for those with gluten sensitivity.

Quinoa would be a worthy addition to anyone’s diet, supplying variety as well as good nutrition. The seed is also excellent feed for birds and poultry and the plant itself is good forage for cattle.

Cooked quinoa is excellent in hot casseroles and soups, stews, in stir-fries, or cold in salads. The seeds cook very quickly.

Due to the relatively high oil and fat content of quinoa, the grains and flour should be stored in glass jars in the refrigerator. Use the grains within a year and flour within 3 months. 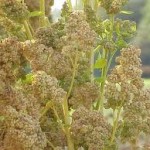 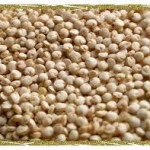 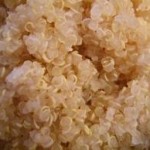