Using coconut biofuel and solar panels, Tokelaua territory of New Zealand in the South Pacific Ocean which consists of three islands of Atafu, Nukunonu and Fakaofu, half way between New Zealand and Hawaii, plans to become self-sufficient in energy this year.

The leaders of other so-called small island states around the world made commitments at a meeting this week organized by the UN Development Program (UNDP) and the Barbados government.

Those affected tiny Pacific countries, which are most at threat from rising seas have vowed to dump diesel and other dirty expensive fuels blamed for causing global warming and replace them with clean energy sources.

The Cook Islands and Tuvalu in the Pacific are aiming to get all of their electricity from renewable sources by 2020, while St. Vincent and the Grenadines in the Caribbean is aiming for 60 percent from renewables by 2020.

East Timor near Indonesia and its government vowed that no family in its capital, Dili, would be using firewood for cooking by 2015 and said half the country’s electricity would be from renewable sources by the end of the decade.

Cook Islands Prime Minister Henry Puna said about 15 percent of the New Zealand dependency country’s budget is spent on importing diesel oil. He has called it a ‘crippling dependence’.

He wants those tens of millions of dollars spent on health and social services and education for the approximately 20,000 inhabitants of 15 islands spread over 2.2 million square kilometers (850,000 square miles) in the Pacific.

The government plans to start converting to solar panels and wind turbines. Already nearly all houses have solar water heaters.

Work will start on Rakahanga in the northern group of islands next year with help from Japan. New Zealand is to fund the energy revolution in the southern islands.

Puna said the energy change was proposed while campaigning for a 2010 election. “We didn’t realize, it but we were tapping into a reservoir of environmental consciousness among our people. The reaction has been fantastic.

In North America and many European countries there has been resistance to wind turbines sprouting up on land and sea.
“There may well be some in the Cook islands,” said Puna. “But I think once people realize and see the benefits from these instruments there will not be too many problems.”

UN studies show that oil imports account for up to 30 percent of gross domestic product in some Pacific countries, with prices bolstered by the huge distances it has to be carried.

Ministers at this week’s meeting complained in a statement that despite their ‘significant actions’ to help ease global climate change, international action has been “slow and grossly inadequate,” given the increasing threat to island nations from rising seas.

Their declaration, adopted ahead of next month’s UN Conference on Sustainable Development in Rio de Janeiro, called for the new energy sources to be made ‘accessible, affordable and adaptable,’ so all threatened island states can take steps to adapt. 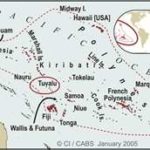