WBO welterweight showdown in Las Vegas on November 12, between title holder Manny Pacquiao and challenger Juan Manuel Marquez is sure to be full of excitement.

Both fighters will provide firepower and thrive on aggression that most people believe that the fight will not go the distance.

Pacquiao, who has won world titles in an unprecedented eight weight divisions, believes he is a much improved fighter now since he last fought Marquez in the ring.

“I’m more experienced, especially in my strategy and techniques. I’m more improved in throwing my right hand, my movement side to side, and my timing,” said the Filipino, who has a career record of 53-3-2 with 38 knockouts.

Although, it has been more than 3 years since their last fight, Pacquiao has made a tremendous improvement as a fighter while Marquez has been dominating the lightweight.

Pacquiao has developed his right hand equally powerful with his left, an added advantage to Pacquiao’s ‘killer punch’ arsenal.

He then developed the skill, the ‘in and out’ of throwing punches and mastered the lateral movement in his footwork.

Where at certain angle, Pacquiao gets in and throws a bunch of hard punch combinations at will then get out to evade any counter punching reply from his opponent.

With that said, it could now be an excellent opportunity for Pacquiao to show and neutralize the counter punching style of Marquez which has been troubling Pacquiao in their last 24 rounds of engagement.

While Pacquiao claims he was insulted by Marquez wearing a T-shirt bearing the print,”We Were Robbed” while in the Philippines, Marquez also believes that he has just as much motivation that Pacquiao has for their third and final meeting.

Nacho Beristáin, the 68-year-old Hall of Fame trainer of Marquez who has overseen the careers of 23 world champions mostly Mexicans, believes Pacquiao will bring the toughest challenge of his charge’s career.

A short analysis by this author as to the outcome of Pacquiao – Marquez trilogy on November 12, here’s the possible scenario of how the fight would end.

If Marquez sticks to his usual game plan of counter punching, the fight would not go the distance. He would be stopped by Pacquiao on either a Ricky Hatton or David Diaz KO ending or a Miguel Cotto TKO stoppage.

However, if Marquez finds his engagement with Pacquiao unsustainable all the way in the first three rounds or so. Marquez might change his usual strategy to survival mode to evade humiliation for a possible stoppage or a knockout by Pacquiao.

Marquez would likely complete the 12 rounds replicating what Joshua Clottey and Shane Mosley did just to survive. The outcome of the fight this time would be a lopsided unanimous decision in the 3 judges’ scorecard in Pacquiao’s favor. 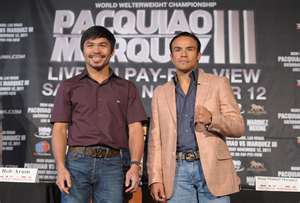