Records show that the country imports ninety nine percent of its dairy requirements. In order to succeed, PCC officials have unveiled a new procedure to replace the hit or miss system for in vitro-fertilization through ovum pick-up, which uses sonography or ultrasound to identify the eggs to be picked up from the genetically superior female carabao’s ovary.

These eggs are collected and kept it in a laboratory to be fertilized by semen from genetically superior male carabaos. To maximize the utilization of the egg, PCC has been using two Bulgarian female buffaloes as donors.

PCC officials said that the procedure could be done twice a week as female carabaos produce egg follicles every week, and this raises the possibility of maximizing the production of cubs as draft animals or producers of milk.

Currently, PCC estimates that during the life span of carabaos that range from 15 years to 20 years, only a maximum of eight cubs are produced. With more female carabaos and more eggs kept in the laboratory, PCC can technically use the biotechnology procedure to bred more female carabaos which produce milk from ten to fifteen liters a day while female from traditional carabao breeds produce only one and in half to two liters of milk a day.

Eggs collected from the female donors are fertilized in the laboratory for one week until they become embryos and are ready to be transferred to a surrogate mother for a gestation period of eleven months.

Presently, PCC scientists are using the ovum pick-up procedure on Bulgarian buffaloes that are bigger, more fecund and produce milk far higher than the volume generated by domestic carabao breeds. They said the procedure has been tried and tested in countries like the US, New Zealand and Japan. 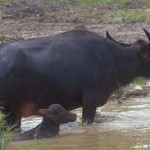