A fence of beehives was invented and developed by Dr. Lucy King, a biologist after studying elephants’ fear of being stung by bees.

The fence serves as a deterrence and stops the mighty animals from rampaging into farmland because they are so scared of the stinging insects.

Her invention has reduced clashes between humans and elephants and it has been presented with a prestigious award by the United Nations.

She was awarded with the international research prize of the Convention on the Conservation of Migratory Species of Wild Animals at a United Nations ceremony in Bergen, Norway, on Tuesday.

‘Dr King’s work spotlights an intelligent solution to an age-old challenge while providing further confirmation of the importance of bees to people and a really clever way of conserving the world’s largest land animal for current and future generations,’ said Steiner.

‘Her research underlines how working with, rather than against, nature can provide humanity with many of the solutions to the challenges countries and communities face.

Dr. King had noticed while carrying out her research in Kenya in 2002, that elephants refused to feed on acacia trees that housed beehives of African honeybees for fear of being stung.

In view of this, Dr King developed the beehive fence as a way of stopping migrating elephants from entering farmland.

The experiment used the digital playback of bee sounds. It revealed that elephants would alert each other about a possible attack.

The fences were built with one beehive every 10 meters and the project found that an elephant attempting to enter a farm would instinctively try to bypass the beehive.

Out of 90 different raids, or attempted raids, by elephants only six incidents of elephants crossing the fences were noted. 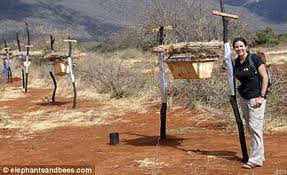