Phil Mickelson maintained his lead in the second round by firing a 70, to reach the halfway mark at six-under, two shots clear of the field.

The American golfer, who recently won the Pebble Beach Pro-Am, featured two birdies, an eagle, and three bogies in the second round.

The gusting winds that bedeviled players on Thursday had evaporated, leaving mostly clear skies and pleasant temperatures in their wake.

“I thought there were some low scores out there,” said Mickelson, who is seeking a second straight US PGA Tour title after a stirring victory at Pebble Beach on Sunday.

Even if his lead didn’t hold up, Mickelson noted he would be in a strong position going into the weekend.

He holds a one-stroke lead over Pat Perez, who carded a 65 to finish at five under.
Australian Jarrod Lyle also shot a 65 to leave him in a group of five golfers two strokes out in third, along with America’s Jimmy Walker (66), Matt Kuchar (69) and Jonathan Byrd (70), and Sweden’s Carl Pettersson (70).

Perez, 36, and Walker, 23, both managed six birdies in their rounds. 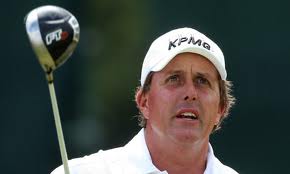