The National Parkinson Foundation of the United States recommend a system called ‘Fitness Counts’, a regular exercise regimen that can help in maintaining your abilities, strengthening your muscles, increasing mobility in your joints and building up your general fitness and well-being in the management of Parkinson’s disease.

Now researchers have found that ‘weight training’ appears to pay off more and managed to reduce their symptoms effectively than the recommended exercise program.

Parkinson’s is a debilitating brain disease which causes tremors and can make it difficult to walk.

As the disease progresses, sufferers often find the tremors spread up their arms, while their bodies become more rigid. There is no cure for the condition, caused by the loss of nerve cells in the brain.

It has long been known that taking part in some form of exercise helps keeps symptoms at bay to a certain extent.

While the effects of the ‘Fitness Counts’ appeared to wear off over time, volunteers assigned to do weight training instead were better able to control their physical symptoms right until the end of the two-year project.

Professor Daniel Corcos, of the University of Illinois in Chicago, said: “Our results suggest that long-term weight training could be considered by patients and doctors as an important component in managing Parkinson’s disease.”

Results of the study are to be presented to the American Academy of Neurology annual conference in New Orleans next week. 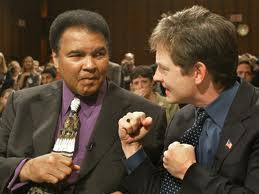