Almost a third of the population or some 200 elephants in the national park in northern Cameroon were killed by poachers and the massacre is still going on, according to a wildlife protection group.

According to the International Fund for Animal Welfare (IFAW) on its website, ‘ At least 100 elephant carcasses have been found in the park in the past month and ongoing shooting is making it impossible to conduct a further, detailed assessment of the situation.’

‘More carcasses are expected to be found in unexplored regions of Bouba Ndjida,’ it said .

Many orphaned elephant calves had been spotted abandoned following the shootings and concerns were high the babies may soon die of hunger and thirst.

“Their deaths will only compound the impact of the poaching spree on the Cameroon’s threatened elephant populations,” it said.

IFAW official Celine Sissler-Bienvenu said it was common for armed gangs of poachers to cross from Sudan during the dry season to kill elephants for their ivory.

“The ivory is smuggled out of West and Central Africa for markets in Asia and Europe, and the money it raises funds arms purchases for use in regional conflicts, particularly ongoing unrest in Sudan and in the Central African Republic,” Sissler-Bienvenu added.

The only solution according to Sissler-Bienvenu, was to end demand for ivory especially in Asia and to ensure conservation officials in range states were provided with skills and the equipment necessary to counter professional gangs of poachers.

IFAW said Britain, France, the European Union and the United States had voiced alarm and called on the Cameroon authorities to take urgent action to stop the killing.

“What these countries now need is the commitment of the international community to financially support these highly skilled and motivated trainees to be able to meet the task of protecting elephants,” it said. 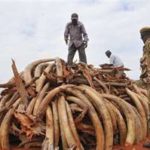