American golfer Phil Mickelson shot a five-under par 66 to take sole possession of the lead in the first round of the Northern Trust Open In California.

The four-time major winner coped well on a blustery day and had been tied for the lead with J.B. Holmes and Hunter Mahan until the final hole, when he chipped in from 35 feet for a sixth birdie of the day.

Mickelson came into this tournament in Pacific Palisades with a recent win at the Pebble Beach National Pro-Am to become only the ninth player in PGA Tour history with 40 wins.
Holmes (67) and Mahan (67) are tied for second place at four-under.

Also in the mix towards the top of the leaderboard was Sergio Garcia (69) , one of eight players grouped together on two under, with the likes of Stewart Cink (69) and KJ Choi (69) alongside him.

Three-time major winner Padraig Harrington (74) was one over with two holes to play when darkness fell, but his day was considerably better than that of Scotland`s Martin Laird (76) .

He was five over having completed the course, two better off than American Ryder Cup hopeful Anthony Kim (78).

World no. 1 Luke Donald (70) was tied ninth with fellow Englishman Justin Rose (70) at one-under on the par-71 course. 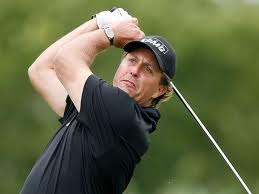