President Benigno Aquino has promoted the then Col. Ramona Palabrica Go, to one star or brigadier general, along with other male military officers to the next higher rank in simple ceremonies at Malacañang.

She hails from the province of Iloilo and now holds the distinction as the first woman general in the history of the Philippine Army.

Go, 54, holds a Bachelor of Science in Chemistry degree from the Central Philippine University and a Masters degree in Development Management from the Asian Institute of Management.

She joined the military service through the Women’s Auxiliary Corps (WAC) shortly after her graduation from college and thereafter was sent by the Army to train at the Women’s Royal Australian Army Corps School and was commissioner as second lieutenant and called to active duty on January 19, 1982.

In 2009, she became the first female line officer to become the Adjutant General of the Armed Forces. She is also a member of the Efficiency and Separation Board and president of General Court Martial No.1 of the Army.

Go is now the assistant deputy chief of staff for personnel or AJ1. She took her oath on April 4 in Malacañang. 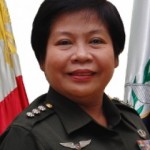