Tiger Woods is back in contention when he went on a back-nine birdie spree, shooting 31 on the way in for a 66 and a seven-under total in the second round for the 75th Masters’ tournament at Augusta.

He’s tied for third with K.J. Choi of South Korea. Woods birdied three holes in a row starting at the eighth, then put together another run of three straight starting at the 13th.

A fourth birdie seemed likely until he missed a short birdie putt at the par-3 16th after sticking his tee shot in tight.

He hit another one close at the 18th, a dramatic cut shot from the right rough that went around a tree and back to the green.

Then, with the late-evening sun barely glinting off his putter shaft, he rolled in the 10-foot putt and gave a few sedate (for him) fist pumps.

“I played my way back into the championship,” Woods said. “It was nice to get it going today.”

Phil Mickelson, the defending champion shot a sloppy 72 and is two under, eight shots behind Rory McIlroy. With a round in the 60s on Saturday, he would be right back in it.

Fred Couples, one of the most consistent players here in the modern era, forgot he was 51 and put up a 68 to tie for seventh.

There was no sign of McIlroy faltering. He played a terrific shot from the fairway bunker on the 18th to 10 feet but missed his last birdie try.

It was a draining Friday. Couples seemed like the surprise of the day until Jason Day came along, and then Tiger took the title with his strong finish.

This volatility, the ability to put up low numbers, is what makes the Masters so great. 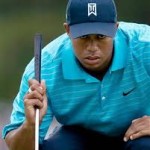