Pippa Middleton, the younger sister of the Duchess of Cambridge, was exposed into the spotlight after her appearance as bridesmaid at the royal wedding and now it is said to be close to signing a book deal on how to be the perfect party hostess.

Her literary agent is in talks about a book, which would certainly be a lucrative deal for Miss Middleton.

The book’s topic pertains to party planning service which is an ongoing family business for the the 28-year-old brunette.

It is also reported that Miss Middleton has had two meetings with publisher at Harper Collins and has met with several others.

Speculations are rife that she could make much money from royalties, sale of international rights and spin-off projects.

‘Pippa is very serious about the project and has been going to meet publishers personally. Pippa hasn’t signed a contract yet but I don’t think it will be far off.

She is a good writer but I expect she would be offered the services of an experienced ghost writer,’ a well-placed publishing source said.

The book, will surely include party etiquette tips, how to decorate a room for a party and what food to serve.

The socialite firmly believes that ‘The key to creating a wonderful party lies not in spending vast amounts but in planning, from choice of venue, entertainer and party theme to the selection of food, decorations and of course the birthday cake.’

The book could probably be out just before Christmas in 2012. 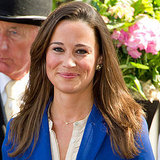