Current global water use runs at about 4,500 cubic kilometers a year while the reliable water runoff available annually is estimated at about 9,000 to 14,000 cubic kilometers not including water in the oceans that are locked in glaciers and icebergs and lost to floods and evaporation.

But the most vital cause of water scarcity is poor water policies according to IFPRI. Among those policies specifically pinpointed is the water subsidies’ policy which has resulted to millions and millions of gallons of unused water go down the drain.

In major metropolitan areas in developing countries, the unaccounted water is water that goes down the drain which is 50 percent or more that has gone to waste.

Water that is provided by public systems at little or no cost to the user, no one in the water system whether they are the water managers, farmers who use irrigation, or urban water consumers has an incentive to conserve water, the report said.

The result is that water is used excessively in all purposes leading to inefficient farming decisions, water logging, salinization, groundwater overdrafting and return flows degraded by agricultural chemicals and industrial pollutants.

To improve the efficient use of water the report suggests for the institutional and legal environment to water users to make their own decisions regarding use of the resource, while at the same time providing a structure that reveals the real scarcity value of water.

The main elements of these reforms include establishment of secure rights of users, decentralization and privatization of water management functions and the use of incentives including markets in tradable property rights, pricing reform and reduction of subsidies.

In developing countries irrigation water is essentially unpriced, and in urban areas the price of water does not cover the cost of delivery. In most countries, water subsidies of disproportionately bias to the better off, urbanities with access to the public water system and rural farmers with access to irrigation.

Poor consumers who must rely on water vendors often pay 20 times or more the amount paid by better off consumers and irrigated farmers.

The high cost of developing new sources of water will require water to be diverted from agriculture for industrial and domestic uses according to the report. The challenge will be to maintain crop productivity at the same time.

Nearly two thirds of the world’s rice and wheat are grown on irrigated land, and the future growth will rely heavily on the use of irrigation water.

Excessive transfers of water from agriculture would threaten food security. Water savings in agriculture must be accompanied by improved efficiency in urban and industrial water use. 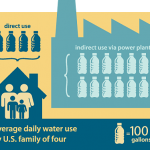