The Vatican has been in fierce opposition to the use of all contraception including condom, it is for this reason why the Catholic Bishops’ Conference of the Philippines (CBCP) is against the Reproductive Health bill (RH bill).

However, this time Pope Benedict has ended the Catholic church absolute ban on the use of condoms after the Pope realized that its usage can reduce the risk of infection from AIDS.

He stressed that abstinence was the best policy in fighting the disease but in some circumstances it was better for a condom to be used if it protected human life.

The announcement is in a book to be published by the Vatican this week based on the first face-to-face interview given by a Pope.

While the Pope restated the Catholic Church’s staunch objections to contraception because it believes that it interferes with the creation of life, he argued that using a condom to preserve life and avoid death could be a responsible act, even outside marriage.

So it’s now clear that the Pope’s foremost consideration is to preserve life and avoid death even it’s off from the sanctity of wedlock .

The provisions of the RH bill that is now under deliberation in Congress is just perfect in women’s lives protection as well as their babies due to unwanted pregnancy that eventually could lead to abortion because natural contraception methods fail.

In this case the use of artificial contraception just to preserve life is morally justifiable and the best option reliable.

Pope Benedict’s historic flip-flapping meant that he recognizes logical approach to the problem that his stand on the issue is not that absolute, after all he is just like any other human being, hence, not infallible.

Last year the Pope’s statement has caused controversy by suggesting that condom use could actually worsen the problem of AIDS in Africa. But now he is saying something that totally devoids his previous statement and accordingly makes a 180 degree turnaround on the issue.

In a face to face interview with the Pope he admits he was stunned by the sex abuse scandal that has engulfed the Catholic Church and raises the possibility of the circumstances under which he would consider resigning.

The Pope gives his most personal account of the distress caused to him by the clerical sex abuse scandal, with particular reference to Germany and Ireland.

The 83-year-old Pontiff says in passages published exclusively in The Sunday Telegraph today that he is aware his ‘forces are diminishing’. 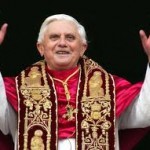