Babies start requiring non-milk food in their diets at six months old, but they don’t develop the molars they need to chew most foods until age 18 to 24 months.

Science, however, suggests that ‘pre-mastication,’ or the pre-chewing of adult food for infants, is actually a traditional and healthy feeding method.

Standard practice among our blender-lacking ancestors, pre-chewing is still the norm in many non-Western cultures.

The act exposes infants to their mothers’ saliva, giving them an immune system boost that they can’t get from the sterile, pulverized baby food bought in stores.

According to research led by Gretel Pelto, an anthropologist at Cornell University, pre-mastication was the solution to feeding infants during this interim period for most of human history, and remains the method used in many cultures today.

Rather than being unhygienic, Pelto and many other scientists think the feeding method carries on the immune-system-building process that begins with breastfeeding.

By exposing infants to traces of disease pathogens present in a mother’s saliva, it gears up their production of antibodies, teaching their immune systems how to deal with those same pathogens later.

It may also prevent the onset of autoimmune diseases, such as asthma, that are very common in industrialized societies.

These conditions arise when one’s immune system mistakenly attacks one’s own cells, and such ailments have been strongly linked to underexposure to diseases during childhood.

The most common argument against pre-mastication is that infants occasionally catch infectious diseases from the saliva itself.

For example, women with HIV are advised against pre-chewing their babies’ food.

However, research shows that disease transmission through pre-mastication is far less common than was previously assumed, because natural antibodies in saliva significantly reduce the infectiousness of the disease pathogens present there.

Breastfeeding was outmoded in the 1950s, and has since seen a renaissance.

“The evidence for breast milk is overwhelming,” Pelto said. We think the story is identical for both breastfeeding and pre-mastication, they save lives by ensuring good nutrition and good development of the immune system. The evidence for pre-mastication has yet to be completed, but the logic is clear and the epidemiological evidence supports it.” 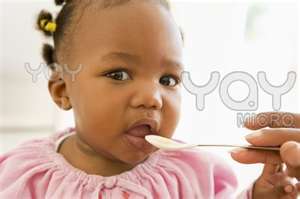