The issues that have to be addressed include the custody of the coco levy fund after the Supreme Court (SC) ruling held that the motions for reconsideration filed by Philippine Coconut Producers Federation Inc. (COCOFED) and its former officer Danilo Ursua lacked merit to warrant the reversal of the earlier ruling..

In view of the recent ruling of the SC, President Benigno S. Aquino III has asked the Presidential task force ‘to come up with a report on the issues surrounding the coco levy fund.’

Composite members of the Presidential Task Force on the Coco Levy Fund (PTFCL) will reconvene on Oct. 5 to finalize its recommendation to the President.

According to Deputy Presidential spokesperson Abigail Valte, the task force could now be guided by the recent SC ruling in coming up with a recommendation to the President. The ruling, at least, sets a clearer parameter for the task force to work on, she added.

However, the High Court stressed that the government should use the funds for the benefit of the coconut farmers.

Senate President Juan Ponce Enrile recalled that during the administration of the late strongman Marcos, a policy for the coconut industry was set up with the creation of Philippine Coconut Authority (Philcoa).

According to Enrile, he was the chair of Philcoa when he was requested by San Miguel Corporation (SMC) chairman Eduardo Cojuangco to help him with the approval of ex-President Marcos to set up a seed garden for the coco industry.

He said Cojuangco provided the land but the program was Philcoa’s. The project was aimed at replacing the aging coconut trees and planting new species along with local species.

Marcos decided to stop the program when many people criticized the handling of the coco levy fund and instead they were accused to have pilfered the fund,’ according to Enrile.

A trust fund was then placed at United Coconut Planters Bank (UCPB), more than 73 percent of which belong to the farmers and 27 percent to private individuals.

Enrile noted Cojuangco was made president of UCPB because he was knowledgeable in banking, having come from Bank of Commerce.

To prevent the fund from being pilfered, Enrile filed then Senate Bill 2978 for the creation of the Coconut Farmers Trust Fund, intended to provide adequate financial protection to the coconut industry and its workers but the bill remains pending before Congress.

In the SC decision, it upheld but modified a decision earlier by the Sandiganbayan declaring SMC shares, having been bought with coco levy money, as public funds.

The shares were registered under the names of Coconut Industry Investment Fund (CIIF) and its holding companies and the acquisition of these corporations and assets ought to be regarded and treated as government assets, according to the High Court. 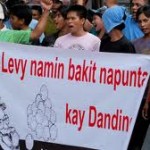