Rice crop lodging is a common sight to ricefields which could not withstand to heavy rains and strong winds.

Lodging occurs when the rice stem collapses because it could no longer support its own weight. All rice varieties are prone to it with varying degrees.

Root lodging and stem failure are the two common types of lodging that could affect crop yield. The first usually occurs early in the season while the latter occurs when rice stalk has matured and it becomes brittle.

Poorly spread, insufficient or shallow crown roots due to dense rice plant populations cause weak anchorage and it is susceptibly high in root lodging while large canopy size and stem-base disease reduces material strength of the stem and increases stem lodging.

Effective lodge prevention requires a knowledge of the causes. Lodging occurs when gravity pulling the crop to the ground is greater than the counter forces within the plant keeping it upright. Failure will occur at the weakest point.

A flattened crop due to lodging makes harvesting difficult and could subsequently lead to poor grain quality and low yields.

In Talavera, Nueva Ecija, a no tillage demo plot was introduced to farmers by eliminating plowing and harrowing in its land preparation.

In adapting the system, it has been found that rice plants have stood strong after heavy rains and strong wind.

‘In conventional land preparation, paddy soils are softer because soils are heavily disturbed. A soft soil weakens the holds of the roots,’ he said.

The demonstration trial is part of the No-Tillage and Palay Check System for Irrigated Rice Production project signed early this year between PhilRice and the Department of Agrarian Reform. The Bureau of Agricultural Research funds the project. 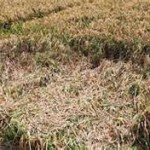